I was named Sharanadevi by my dear teacher Marshall Govindan Satchidananda in 2003 after I completed an intense period of training in the Acharya program. I was initiated in 1998 in his first visit to Brazil. Since that time, my life has changed completely and gradually and so did the life of many persons around me.

I am almost 50 years old now. I was born and raised in Brazil. I have a degree in Arts and Communications. During the years I was at the university I was involved in politics. Because Brazil was under a military dictatorship, I became a member of a political organization that fought for human rights and for workers rights. I helped to create the Workers Party. All I wanted to do was to serve the poor and remain an activist improving the conditions of others less fortunate.

Unfortunately, I learned that politics makes very little difference, if the consciousness of politicians doesn’t change. For the changes necessary in the world, we must first begin to change human nature.

I got married and had three children and while they were still very small I started working as a massage therapist doing therapeutic massages. During that same period I started a process of inner self-discovery with a very powerful tool called The Holotropic Breathwork. I continued this for several years before it led me to Yoga.

Holotropic Breathwork increases the circulation of prana within our physical and subtle anatomy, and as a result one can remove energetic blockages, purify emotions, encounter Higher Beings on subtle planes, and relieve and integrate important events of this or previous lives. The increased amount of energy removes some blockages in the unconscious. It is not a directed process, but an internal selection of what emerges. But in contrast to Yoga, the ultimate goal is not awareness or Self-realization, only healing. After many emotional releases in these sessions, a deep melancholy came up and I felt that I was longing for God, and to find the presence of God, perhaps through a Guru. So I prayed insistently to God to find my Guru. I could think of nothing else. I believe that period was one of the most intense periods of aspiration in my life. It was during that time that Babaji appeared in my dreams and presented himself as my Guru. I started my search for a Kriya Yoga initiation but that happened only after five more years.

Kriya Yoga initiation and further practice changed my diet and changed my body. It changed the way I communicated with people. I couId see I was getting stronger and the way it affected me made me decide to share that with others, so after attending the Kriya Hatha Yoga Teacher Training I began to teach Kriya Hatha Yoga, and at the same time I was translating the seminars for Govindan in Brazil. Those years were pretty intense in emotional and physical cleansings. I was invited to join the Order of Acharyas of Babaji’s Kriya Yoga in 2003.

In 2003, after being inducted as an Acharya, I started to give Kriya Yoga initiations seminars in many places in Brazil. Since 2005, we have translated into Portuguese and published the following books, Babaji and the 18 Siddhas, Kriya Hatha Yoga (two editions), and Patanjali’s Yoga Sutras and now we have almost completed the Kriya Yoga Insights Along the Path. We have translated the 24 lessons of the Grace of Babaji’s Course and created the Portuguese pages of the website. For the past several years I have also been giving the second level initiations in Brazil, and organizing Teacher Training seminars and 3rd Level seminars of Durga Ahlund and Govindan. We have also created a beautiful Yoga center in the heart of Sao Paulo, where many people come to learn Hatha Yoga and Kriya Yoga. All of this has been made possible with the wonderful support of so many people in our beautiful Kriya Yoga community, during the past five years.

Teaching has been personally rewarding for me. When I see the effects of sincere practice on those who come and attend our courses and seminars, I feel joy. I feel such gratitude, when I witness my own mental and vital transformation – the qualities of beauty, peace, innocence, even though progress has so many peaks and valleys! Being a teacher gives me an opportunity to experience soulful, even divine encounters with the fellow sadhaks and students. Furthermore, I am learning so much and opening as a teacher and as a human being.

Teaching in the beginning was a mixture of good intention and recalling all the information to be transmitted, always praying for and calling for Babaji Shakti to magnetize the words. It is still like that, but more and more open and confident to be a channel of divine words. What is amazing about teaching is the movement that is created. You start a motion, you pass the energy on and it has its own way of spreading. You can see clearly the wave affecting so many in its way.

For me, the purification and awakening has not been easy. It is like peeling off layers of my being, one at a time. In the first phase of transformation the energy was able to begin to strengthen my body and start to clear the mind and emotions. That new flow of energy helped me to detach from negative, depressive, selfdestructive thoughts and build a more strong and confident personality.

As it continued the next layers included cleansing the habit of laziness, inertia and resistance to get things done. Like Babaji says it was, “Practice, practice and practice!” I had no idea what I was doing just following the flow. So I dedicated myself to service, and for some years all I did was Karma Yoga. Whenever I was invited I would go and teach the Kriya techniques and this way a network was being created.

I always get wonderful feedback from the students. One student from the South of Brazil, for example, with the aid of a pendulum could measure the expansion that happens in the energy of the food after offering it with the Mantra of Blessing the Food. He placed the pendulum over the food and the pendulum showed 7.000 angstroms and after he and his family offered the food with the mantra the pendulum showed 40.000 angstroms. He was amazed and the practice was integrated into his little family. They could really see the effect of a prayer with simple things.

Students share with me the changes in their lives or in other people’s lives because of Babajis blessings. Like the student who after studying and practice with the Grace Course left her professional career in the stock market, and now she is a yoga teacher and teaches yoga to kids, and feels much more fulfilled and happy. Or the student who worked with addicted youth. She taught them only the 18 postures and simple meditations and she could notice the difference in their strength to fight drug addiction.

The real and long process of yoga has not been peaceful nor simple. Some steps forward several steps back. I was giving support to my students and to the network of kriyabans but I was absent to my family and friends and worst, to myself. My role of Teacher became out of proportion, exaggerated, inflated and my family and personal life was not integrated into the rest of the picture. I was under a great deal of emotional stress. I thought that because I was doing karma yoga as service to Babaji, Babaji would take care of everything else. What I didn’t understand was service and love to the Divine begins first with yourself and your family and community and then everybody else.

Then I got sick. I was diagnosed with breast cancer. That was, and still is, an intense period of learning in a very difficult way about love, support and surrender. “You are not the doer,” I thought, and I knew how to serve God. I felt I was doing everything right. I wanted to be a “perfect disciple,” and felt that doing so many hours of sadhana for such a long period would guarantee that. Of course, those years of intense sadhana led me to realize what I am realizing now. Everything takes a maturing process. The intense sadhana wasn’t the problem, my egoistic, rajasic approach was.

These days I am taking good care of the health and moreover I am learning how to introduce fun, pleasure and lightness into my Karma Yoga. Less feelings of “I have to do it” and “I will disappoint this or that.” I am trying to balance my dharma of parenting and being a partner to my husband and to my co-workers with my dharma of teaching, traveling and serving Babaji through Kriya Yoga. I am really detaching from the results: “letting go and letting God”.

I hope and aspire this learning process will always continue. That we are always open and surrendered to whatever comes, because it is not our will but the will of the True Self. After all, the name I received, Sharanadevi, means “Goddess of Surrender” and a spiritual name has the power of a mantra, every time somebody calls your name, they are reminding you what you have to do in this life.

May Babaji be with us and guide us. 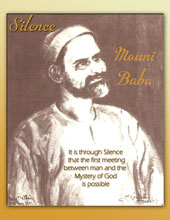